I went to Barcelona and Paris a few weeks ago so I thought I’d write a quick post about some of the fantastic propaganda that came out of Revolutionary Catalonia during the Spanish Civil War, when the various anti-fascist parties sought to fight on a “visual” as well as military front.

Catalonia — specifically Barcelona — had long served as something of a petri dish for left-wing radicalism. For almost a century radical movements such as anarchism had been able to endure, expand and evolve in Catalonia before culminating in 1936 with the extraordinary but short-lived triumph in Barcelona.

The brief triumph of l’anarcosindicalisme in Catalonia was a long time coming. After centuries of comparative decline, the nineteenth century brought Catalonia a sudden upsurge in culture and wealth. Barcelona especially was transformed in a matter of years to such a degree that it was able to hold a world’s fair in 1888 (the year in which the General Union of Workers, or UGT, was also founded) through which the city flaunted its flashy buildings, boulevards and new neighbourhoods to the nations of the world. Artists and architects flocked to the city to begin work on dozens of ambitious projects — projects that required a lot more labour, which meant more workers crammed into ever-smaller housing receiving ever-worse pay. Catalonia’s rapid industrialisation led to decades of exploitation, precarious employment, deteriorating working conditions and civil strife, all of which allowed anarchist groups to flourish in Catalonia as nowhere else in Europe.

Before the civil war there were intermittent outbreaks of violence. The most famous was the mini-revolution of the Setmana Tràgica or “Tragic Week” in which hundreds of civilians were gunned down on the streets by the army and Civil Guard, but there was also Asturias in 1934, a strike-turned-uprising that Francisco Franco crushed with brutality that presaged the later Nationalist atrocities of the civil war. The Asturias uprising would later form an important part of the mythology of the Spanish left (see below).

The coup in 1936 gave Spain’s anti-fascist groups the opportunity and justification to indulge their revolutionary aspirations — aspirations that varied considerably from group to group, and would prompt disastrous infighting just a year later.

As with the nationalist rebels, the republicans or “loyalists” were never a cohesive force. Among those who inherited Catalonia after the military rebellion were the Trotskyists of the Partido Obrero de Unificación Marxista (or POUM, the group with which Orwell fought), the anarchists of the CNT-FAI, the communists, the socialists and, of course, the Generalitat, the seat of government in Catalonia whose power was, for much of the war, only ever nominal (Companys, the president, would complain that he ‘presses a button but nothing happens … gives an order but no one obeys’).

It didn’t take long for the multitude of acronyms roaming and co-governing Catalonia (CNT, FAI, UGT, PCE, PSOE, etc) to turn on one another, denouncing each other as inept (or worse) and then, finally, shooting at each other in the “May Days” of 1937. The communist propaganda cartoon below shows the POUM slandered as thinly-disguised fascists:

What a number of writers and visitors to Barcelona tended to noticed was how drastically the revolutionaries reshaped the city. Every business was politicised as shop windows became tapestries of propaganda posters. Orwell noted favourably how in one of his favourite cafés ‘the word ‘POUM’ immediately procured you french fries and smiles from the waiter.’

Flags draped on prominent buildings, hammers and sickles etched onto walls, songs and slogans sung from loudspeakers and posters plastered throughout the city. An article in the ABC newspaper, seized by the republicans not long after the rebellion, declared: ‘Every space must be used to incite the spirit in its fight against the enemy’ (source). The sheer effort that leftists from every party put into their propaganda dazzled many newcomers: the streets of Barcelona were soon ‘aflame with posters of all parties for all causes’ according to Robert Merriman, an American who fought and died with the Abraham Lincoln Brigade. The various anti-fascist parties of Catalonia established a so-called “visual front” with which they fought against fascists (and occasionally each other). Often the posters included requests for aid, whether material or manpower. Here are two memorable images pleading for “Mes Homes, Mes Armes, Mes Municions!” (“More Men, More Arms, More Munitions!”): 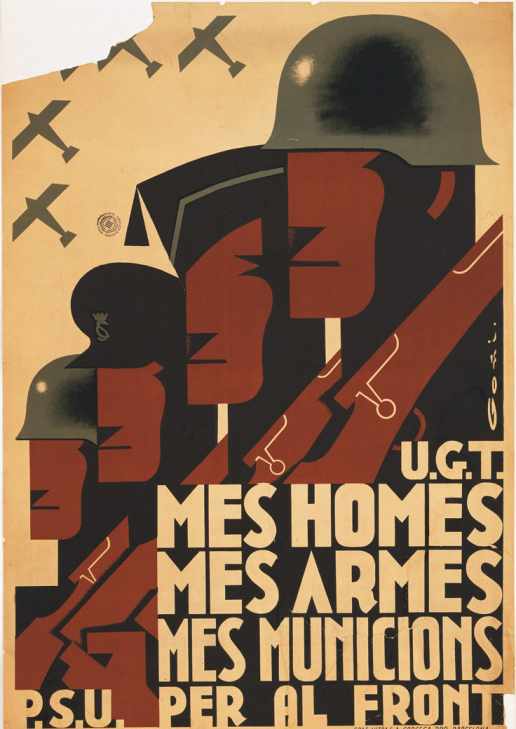